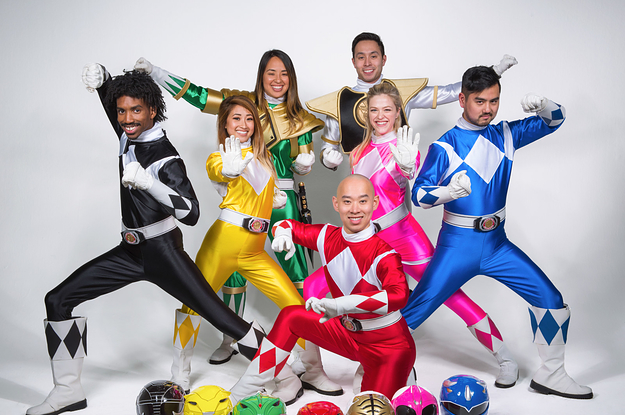 Four athletically able teenagers along with their brainy friend Billy are selected by Zordon to fight the evil of Rita Repulsa, her monsters and her minions after the witch is accidentally released from imprisonment in an intergalactic dumpster on the moon. Later in the series, the rangers are joined by Tommy, the once evil Green Ranger designed for Rita's evil, but later was deprogrammed and spent two portions of the series briefly as the Green Ranger. Over time, some rangers had to pass their powers to others as well. Action scenes and scenes with Rita were edited from footage based on Japanese action sagas. Replacement villain Lord Zedd was designed in the U.S. A team of teenagers with attitude are recruited to save Angel Grove from the evil witch, Rita Repulsa, and later, Lord Zedd, Emperor of all he sees, and their horde of monsters. 15 years ago, Power Rangers was one of the shows that swept the nations, especially that of the youth. When I was a 3-year-old kid living in the Philippines, I would watch this show every Friday on ABS-CBN (Channel 2 over there). When the movie came out in 1995, it was all shock and awe to me when I watched it with my dad and 2 uncles. My grandparents even sent me a "Balikbayan" box full of Power Rangers stuff (including the easy-to-build Megazord figure and the stuffed toys of the Rangers). I even played the video games, and loved only one of them ("MMPR: Fighting Edition"), which was REALLY sad. Anyway, it was the show that set a stepping stone on my interest on robot series (especially anime mech series like "Gundam") Now that I'm 18, I'd like to think this show is pretty cheesy to me now. To prove this, I took a trip down memory lane by buying a 2-set DVD collection with "MMPR: The Movie" and "Turbo: A Power Rangers Movie" and watched both of them. I was like, "Ugh. How awful. Just another junk in the attic for me." For all of you people of my generation, this is NOT a show that you'd want to watch over and over again. I'm not saying to leave it behind for the rest of your life, but occasionally is not a bad thing now, is it? Instead of "Power Rangers", I'd recommend something like "Mobile Fighter G Gundam" (HIGHLY RECOMMENDED), "Ninja Senshi Tobikage" (aka Ninja Robots), or even the ORIGINAL Sentai shows that were the basis of "Power Rangers." How can u NOT like power rangers? For a 6 year old it was the coolest thing in the world. Good dialogue? Plot lines? Cheesy one liners? Sure they're there, but honestly, do u think a child would REALLY take those into account when thinking whether a show is good or bad? The problem with all u people is that u look at it with an adults point of view. Ask ANY child's opinion, and they would claim that MMPR is one of the best things since sliced bread.

I'm 19 now, and i still love watching it cos of the fond memories it brings back. I'm sure many of those around my age bracket still do too. Hell, its hilariously poor, but there is always that little part of me that turns back into a 6 year old kid, and cheers the Power Rangers on. a5c7b9f00b